Funakoshi was invited to Japan in 1922 to give a demonstration of karate at the first National Athletic Exhibition in Tokyo. He decided to remain in Japan to promote karate, and with his help it became part of the school curriculum in Japan. The name Shotokan was given to Funakoshi's karate by his students.  "Shoto" was Funakoshi's pen name as a writer, meaning "pine waves" and "kan" means house. Funakoshi's school became known as the Shotokan.

Beyond building the foundation of Shotokan, Funakoshi served as an ambassador of karate, eventually helping to popularise it through public demonstrations and by working to bring it to karate clubs and universities. During World War II western troops discovered Shotokan, so training then spread into more countries.  In 1948 Funakoshi established the Japan Karate Association and he remained the head of the JKA until his death in 1957.

In 2005, members of KASKA traveled to Japan and visited Master Funakoshi's grave.  It is maintained to this day by students of Shotokan, as his precepts of physical and spiritual discipline and training continue to build strong students throughout the world.

In 1868 Gichin Funakoshi was born in Shuri, Okinawa,  As a child he was not very healthy, and in elementary school he became friends with the son of a master of Okinawan karate, Anko Asato. Funakoshi began to train with this master and found that his health and physical condition began to improve.  He also trained under a master of Shorin-Ryu, Master Anko Itosu.  Because of the ban, anyone who studied these arts did so in secret, and usually at night.
In 1902 the ban on martial arts was lifted, and the Commissioner of Education recommended it be included in the curriculum of physical education in the first middle school of Okinawa.  Funakoshi had become an educator, and the ruling meant that he could share his training; he soon had students who wished to learn.

the History of Shotokan Karate

The history of unarmed martial arts dates back over a thousand years and is shrouded in mystery and legend. It is believed that the first form of martial art was created by a monk named Bodhiharma. He founded Zen Buddhism and eventually took his teachings to China.  At the Shaolin Temple he began teaching the monks. At first they were physically unable to keep up with his teachings, so Bodhiharma devised a training system to develop the monks both physically and spiritually. The Shaolin Monks became known as the best fighters in the world, and the word of Buddhism spread into Japan and Okinawa.
In the early 1600s Japan had invaded Okinawa, and the people were banned from owning any weapons. This ban included the practice of any unarmed fighting styles as well, so those who did so were forced to train in secret. 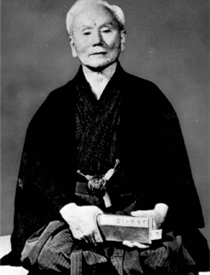